Flowers Sing When We Sleep

Their Voices Fill the Universe

“To Be the Waves and the Ocean,” Tanja Grunert Salon, Princess Beatrix House, Hudson, NY, July-August

"If You Like This You'll Love That ", Collarworks, Troy, NY, June (online)

“Together in Isolation: An Outdoor Group Show for Everyone,” The Re-Institure, Millerton, NY, May (indefinite)

“A Rabbit As King of the Ghosts”, Mitchell-Innes and Nash, curated by Justine Kurland and Daniel Torop, June

“Are We Here Yet”, a video and dance collaboration with choreographer Kate Gyllenhaal and her company, MoCo, presented at the Tribeca Performing Arts Center, NY, NY, March 2005 and again at Jacob’s Pillow, Beckett, MA, July

“A Room With A View”, curated by Mike Weiss, Sixth@Prince, NY, NY, May

The Yellow Round Residency, Claverack, NY, 2019

Fellowship and Residency at the Musée Claude Monet in Giverny, France, 2000

(Find below awards/honors for Black Lake, an art and music collaboration between Susan Jennings and Slink Moss between 2009-2019)

“It All Starts In The Mind Growing Like a Diamond,” Readywipe Gallery, Holyoke, MA

“Tickle the Atman”, The Re Institute, Millerton, NY

“It All Starts In the Mind Growing Like a Diamond”, Readywipe Gallery, Holyoke, MA, February

IMBY, “Tickle the Atman at The Re Institute” by Joshua Marsh, September, 2018

“Gray Rainbow” a brochure published by Dowling College, Oakdale, NY with an essay by StephenLamia, 2011 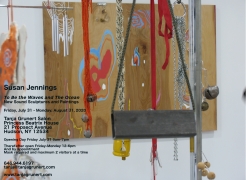 New Sound Sculptures and Paintings
Susan Jennings: To Be the Waves and The Ocean July 31 – August 31, 2020